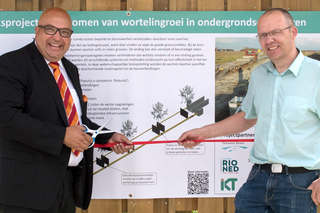 IKT Managing Director Roland W. Waniek (l.) and Leo Bloedjes from the city of Almere, Netherlands inaugurate the test facility and the information board.

Sewers and tree roots—this gets the alarm bells ringing for pipe network operators, because with root ingress, for example into sewers is something they are struggling with almost daily. In other networks, such as district heating, gas or drinking water, the roots around pipes are more problematic, as they can transfer enormous loading during storms, for example. You don’t want roots in the pipe trench and especially within the pipes.

But, you don’t want to start chain sawing the green infrastructure of the city. Fortunately, there are innovative products and processes that may help keep the roots away from the pipes. Whether they can really do this is currently being investigated by IKT in an international project together with partners from The Netherlands. Passive measures to protect pipes from root ingrowth such as plates, low-porosity backfill materials, mats and special pipe joints are being tested in a test setup that is unique in the world. 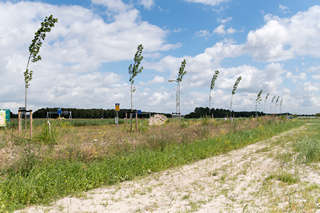 Pipelines and roots: The newly planted trees are part of the test facility which is investigating passive root protection measures.

This open-air test area was set up by IKT in cooperation with IKT Nederland, the city of Almere and the RIONED foundation in The Netherlands. This project investigates how effective ecologically sustainable concepts for resolving conflicts between urban green areas and underground pipelines can be.

Five trees have been planted along two sewer pipes in a new development area in the City of Almere, near Amsterdam, whose roots are now under observation, in the truest sense of the word, because glass panes were installed at two points so that you can actually watch the roots grow.

Explaining research in an understandable way 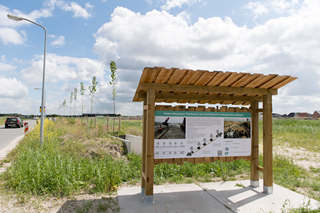 Research made visible: a new information board explains the project, the experimental setup and the goals.

In order for residents and passers-by to understand what the system is all about, an information board has been set up to explain the project and its goals in a comprehensible way. Leo Bloedjes from the city of Almere, IKT project manager Mirko Salomon, IKT Nederland branch manager Sebastiaan Luimes and IKT managing director Roland W. Waniek inaugurated the experimental set-up and the information board.

24 systems made of various materials were installed on the sewer pipes and in the pipe trenches of the test facility to provide passive protection against root ingrowth. These include special pipe connections, low-pore backfill materials, plates and mats. The products and processes that are being evaluated were selected by the client, i.e. they are the systems of particular interest for the city of Almere.

Safe lines under the green city

In this international research project, the effectiveness of the installed systems is now being investigated over a period of several years. The first excavations to examine their performance are planned for Floriade 2022, the International Horticulture Exhibition Expo that takes place in The Netherlands every 10 years, and in 2022 has the Theme Growing Green Cities. Almere is hosting the Expo and experimental set-up is near the exhibition grounds and the participants think that this is really a good fit with that theme. 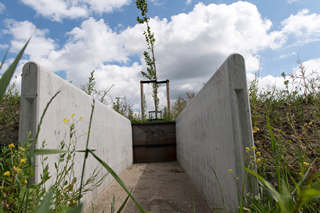 Even before the excavations, the experimental setup provides insights into the subsoil.

After the excavations, the barrier function of the systems against growing tree roots will be analysed for the first time. The researchers will then derive initial recommendations and guidance from the results, which support network operators in selecting suitable root protection measures. In addition, these long-term performance considerations can also provide valuable information for the development or optimization of products and systems for root protection of pipes.

Keeping roots and pipelines at a distance

Underpinning this is the fact that underground pipes and the roots of the city trees share the same ground space and repeatedly clash. Due to high groundwater levels in Almere, the space conditions under the roads are particularly cramped. Underground sewers have to be installed in Almere at depths of only about one meter below the ground level. In the past, to avoid later root ingrowth where new underground pipelines were being installed, individual trees were felled as a precautionary measure. In times of climate change, this is a very unpopular measure, which one absolutely wants to avoid in the future. Therefore, the Gemeente Almere is very interested in new concepts that combine a green city and optimal protection of the pipes against root ingrowth.

Do systems work in the long term? 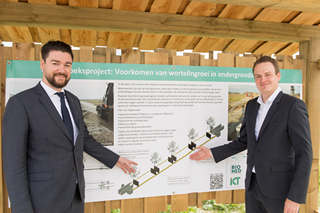 The aim here is either: to make the bedding area of the pipes as unattractive as possible for roots (low-pore backfill materials); to direct root growth into harmless areas (using plates and foils); or to prevent the roots from growing into the pipe (casing pipes and using root-resistant joints). Whether these measures can keep the roots away from the pipes over a long period of time and effectively prevent roots from growing around or into the pipes has hardly been researched to date.

With this international research project, the participants want to make a contribution to a better urban environment, greener cities and safer sewer operation. And contribute to better relations—between pipe network owners and tree owners as well as between neighbouring countries. 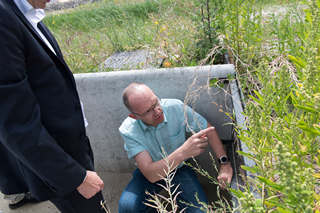 Where are they going? The first roots from the trees can be seen on the glass panes of the test facility.

And for the people visiting the test facility there is already something to see: The first roots have appeared behind the viewing panes.