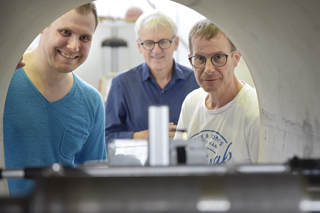 As pleased as Punch: Stefan Bretz, B. Eng. (left) hands over the Mini-MAC to Olivier Thépot (centre) and Jean-Philippe Meynier.

It was lucky that IKT scientist Stefan Bretz, B. Eng., was not required to sit still on this day – he would have been much too excited, because this was when he finally handed over to the customer the MAC system for testing the condition of large diameter pipes, which an IKT team has spent three years developing and several months building. And not to just any ordinary customer, but to Dr. Olivier Thépot of Eau de Paris (the French capital’s water and waste-water management authority). As Bretz notes: “It has been a great honour to build a MAC system for the inventor of the MAC method”.

Paris already has a MAC, of course. However, that one was designed for very large diameters. Instead, the system operator wanted another MAC system suitable for use in DN 1000 to DN 1500 pipes. The French engineers also attached importance to acquiring measured data accurate to the millisecond and the micrometer. Furthermore, they required the whole system to fit neatly onto a standard Euro-pallet, with nothing protruding. IKT engineers Stefan Bretz and Frank Bersuck have realised these requirements in this new MAC version, fondly dubbed the “Mini-MAC”. 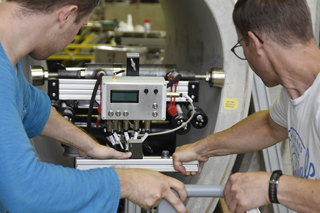 Olivier Thépot, MAC project manager at Eau de Paris and inventor of the MAC system, visited IKT with two of his co-workers during the morning for a training course on the use of the new Mini-MAC unit. Jean-Philippe Meynier and Laurent Martin will, in future, inspect the sewers of the city “de l’amour” using the new system.

Pressure is the key: how the MAC system works

The MAC method makes it possible to identify weak points in the pipe/soil system. In a series of non-destructive tests, the hydraulic cylinder of the MAC system applies sufficient force to the walls of the sewer to move them apart, in a controlled manner, by only a few tenths of a millimetre. High-resolution sensors measure the resulting deformation. This is so slight that no damage to the sewer can occur, but nonetheless is sufficient to permit calculation of the condition of the pipe and the surrounding soil. 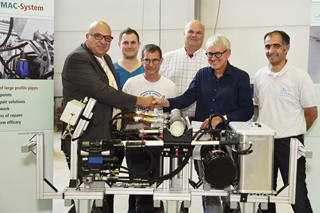 Hand-over of the system took place in the afternoon and Stefan Bretz presented the thick manual. IKT Managing Director Dipl.-Ök. Roland W. Waniek and Head of Project Dipl.-Ing. Martin Liebscher were also there to congratulate Thépot, Meynier and Martin on their new large-diameter inspection system. The new MAC owners were extremely pleased with the high-quality workmanship of the unit, the intensive training course and the high level of detail contained in the manual. The day’s definitive statement came from Jean-Philippe Meynier: “Every sewer is different, and the Mini-MAC now enables us to get to know each and every one individually and in detail”.

Fits on a pallet: a compact unit

Stefan Bretz then helped stow the MAC in the cargo space of an Eau de Paris Kangoo Maxi. After which that vehicle disappeared away around the corner, complete with the MAC system – destination: Paris! So now our colleague Stefan Bretz can again sit calmly at his desk – most of the time! 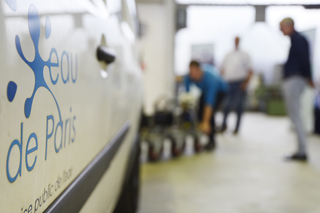 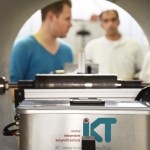 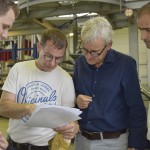 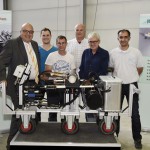 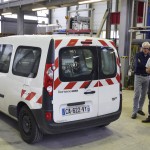