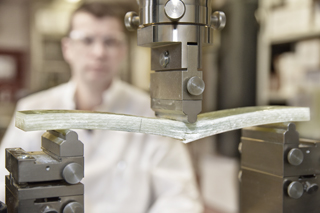 For the fourteenth year running, IKT ‑ Institute for Underground Infrastructure is pleased to present its annual LinerReport. This sets out the results from over 2,100 liner samples taken from rehabilitation sites for quality control purposes in 2017 and tested by the IKT CIPP Liner Test Centre.

As in previous years, the modulus of elasticity, flexural strength, wall thickness and water-tightness have been determined for each sample submitted (for details, see box titled ‘Overview of liner test and inspection criteria’). Pass/fail was assessed for each sample by comparison of results against its target performance, derived either from the liner’s DIBt (German Institute for Building Technology) approval specification (Netherlands: KOMO Certificate; Switzerland: QUICK Guidelines) or as specified by the client (e.g. structural-analysis calculations).

Modulus of elasticity and flexural strength: weaker results than for previous years

On average, 97.4% of the liners reached their required modulus of elasticity. This result was 1.5% lower than 2016 and 1.7% lower than 2015, the year when the highest score was achieved in any of the previous IKT LinerReports. However, this does not necessarily indicate a trend. Fifteen out of the 25 rehabilitation companies in this year’s survey achieved 100% for this test, one of them for two different liner systems.

The flexural strength test results were similar to the Modulus of Elasticity, with the average result lower than in both previous years (-0.8% and -1.7%, respectively). Fourteen rehabilitation companies achieved a score of 100%, but the results were much more broadly distributed. The lowest-scoring company passed only 70% of the tests. 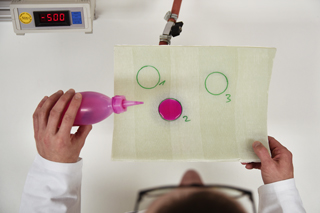 Under vacuum pressure: the test fluid leaked through the laminate in very few samples.

The water-tightness results remained at the same high average level as the previous year, with 99.1% of samples passing. This was the highest average score of all four test criteria. Seventeen rehabilitation companies passed all of the water-tightness tests.

Importance of passing all four tests

Ideally, each liner sample should meet all four test criteria (modulus of elasticity, flexural strength, wall thickness and water-tightness). It is not sufficient for a sample to pass less than four criteria. This is especially important because the DWA-M 144-3 (ZTV rehabilitation – Supplementary Technical Contractual Conditions) explicitly uses these criteria for quality assessment. This ZTV is now a widely accepted standard, and is used as the basis for most rehabilitation contracts.

The proportion of the liner samples tested in 2017 that actually met all four test criteria was 63% (previous year: 61%; see Diagram 1). While it is good that this rate has slightly improved on last year, it must be noted that more than one-third of the liner samples failed to meet one or more test criteria. Thus they do not meet the standards for high-quality sewer rehabilitation.

The top performing contractors in the ‘100% Club’

The quality standards for liners are only met if samples pass all four test criteria. In 2017, 9 out of 25 rehabilitation companies achieved this goal (previous year: 5 out of 22), scoring 100% for all their samples. One company even achieved this top result for two different liner systems.

In summary: there is still room for improvement

The goal of the material tests on liners is for a sample to meet all four test criteria – modulus of elasticity, flexural strength, wall thickness and watertightness. Only 63% of the 2,152 liner samples tested by IKT in 2017 met that goal, while 37% failed one or more tests. The worst results were for wall thickness, which is especially important for structural stability.

This means a significant proportion of the liner samples did not achieve all of the target performance values established for them by certifications, structural calculations or the clients‘ stated requirements. In those cases, the goal of the lining process – to rehabilitate old pipes in such a way that they will last for decades – was only partially achieved.

Wall thickness: wide distribution of results with lowest-scoring company passing only 60% of the tests

The fact that this goal is achievable is shown by the nine rehabilitation companies that managed to meet all four criteria for all of their samples. Three of them have been able to consistently achieve this top result five years in a row. So it is not impossible.

What does that mean for the other rehabilitation companies? It means that there is still room for improvement. And for the clients? It means continuing to focus on quality assurance and to insist that all four test criteria are fulfilled, otherwise the permanence of the rehabilitation measures undertaken is questionable.