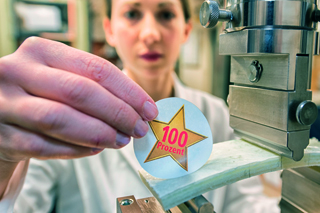 There were excellent CIPP liner results for the individual test criteria, but only one in four of the rehabilitation contractors succeeded in a 100% pass on all tests conducted on their samples. However, five years ago this figure was only one in five, so the overall trend is upward.

IKT – Institute for Underground Infrastructure presents its 13th annual LinerReport. This is based on 1,845 CIPP liner samples taken on sites for Quality Control purposes during 2016 and tested by the IKT CIPP Liner Test Centre. 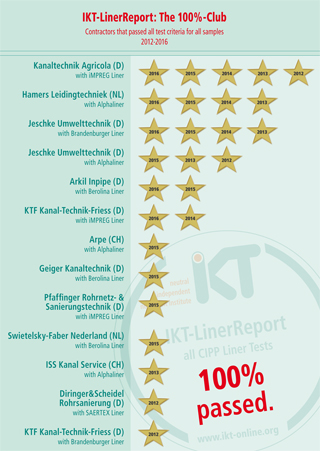 In the past five years, in particular, it has become apparent that a number of rehabilitation contractors achieve optimum performance. These companies meet all four test criteria with all their liner samples and thus constitute what we are calling the “100% Club”. Therefore, they are entirely fulfilling the requirements of the German “ZTV Material Test” (Supplementary Technical Contractual Conditions) and the expectations of their customers. Only five of the twenty-two companies are included in this Club in 2016 (in 2015 it was 9 of 24), and only few contractors maintain such high performance over several years.

Five contractors at the top

The 2016 results for the individual test criteria do exhibit high average success rates, but the overall quality of a liner is satisfactory only if it passes all four test criteria. The five companies that achieved this in 2016 and the liner systems they used were:

Modulus of elasticity was very good

The modulus of elasticity is an indication of the load-bearing capacity of liners. The average score per contractor for samples that passed the test was 98.9%, only slightly below the 99.1% achieved in 2015. Most contractors achieved extremely good results for this test with thirteen achieving 100%. However, five companies performed less well than in the previous year. 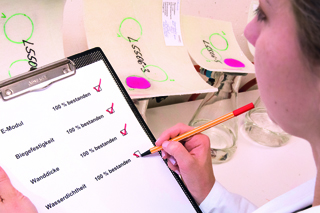 Top performer: all four test criteria met by 100% of samples

The average for tests passed for flexural strength – the point at which a liner fails due to excessive stress – was 0.9 % percentage points (%P) lower than in the previous year. However, at 98.4% the average remains at a very high level. A total of sixteen companies achieved 100% pass, while three contractors had lower scores than the previous year.

Improvement in wall thickness, but wide variation in contractor performance

Among the four test criteria, wall thickness traditionally produces the poorest test results. 2016 was no exception, with an average of 96.2% of the liner samples passing this test. Nonetheless this was a small rise, of 0.8%P, compared to the previous year. Seven companies passed all tests 100%. Among the four test criteria, the range of scores between the best and the poorest performing contractor is widest for wall thickness at 23.2%P.

The average for the water-tightness test criterion in 2016 was 99.1% (+0.5%P on 2015) and is thus closely approaching the 100% mark. Fourteen of the contractors examined succeeded in achieving this maximum and passing the test 100% with all their liner samples. Only three companies performed less well than in the previous year. Overall, the 2016 test results demonstrate that CIPP liners are watertight. 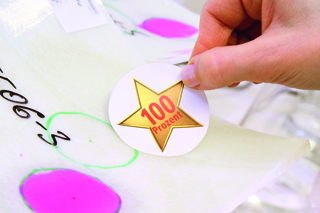 Three conclusions can be drawn from the data presented here for the 2016 IKT LinerReport:

The liner manufacturers and the rehabilitation contractors need to assign importance in the coming years to achieving even better, and constantly high, quality. The aim must be that all liners, and not just around a quarter as in 2016, meet the quality criteria 100%.

However, there is also an obligation on the majority of municipal clients and water companies: they must insist on quality from the contractors, and must consistently have samples from each CIPP liner site tested.