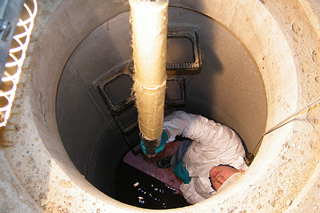 How do short liners perform? IKT figured it out in its latest IKT Compare project.

Short liners are often the first choice for repairing local damage in house connections. But, can they deal with seriously damaged pipes? The results of the new IKT-Compare project “Short Liner for House Connections” are now available.

IKT institute has found in its most recent IKT-Compare project that in principle short liners (also referred to as patch or point repairs) can make good quality repairs to house connection pipes, even when the pipe is severely damaged. Eight short liner systems were tested and achieved scores ranging from “VERY GOOD” to “SATISFACTORY”. The evaluation did find significant differences in performance between the systems that were examined.

The project has been undertaken in co-operation with twelve sewer network operators which wanted to understand the strengths and weaknesses of this widely used technology. It has been funded by the North Rhine-Westphalian Ministry of the Environment and the network operators. 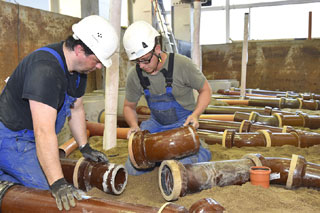 Deliberate defects: IKT has installed eight test sections with a total of 64 cases of damages in its large test pit.

A rehabilitation using a short liner should be able to restore the structural stability of a pipe, secure its hydraulic performance and seal a damaged area. For this reason, the IKT Compare team and the network operators involved placed particular emphasis during testing on the water tightness, operational reliability and structural stability of the rehabilitation. The particular focus was resilience external water pressure.

For this project IKT built eight identical 1:1 scale rigs, in its large-scale test pit (15m by 6m by 6m), into which suppliers installed their short liners. Each rig comprised a length of sewer to which were attached one house connection pipe on the same level as the sewer pipe and two house connection pipes from a higher level. The house connection pipes were prepared with defined areas of damage, including milled patterns of cracks, the removal of some or all of the joint seals and broken sections. A total of 64 damage patterns were produced – eight in each of the eight test rig setups. 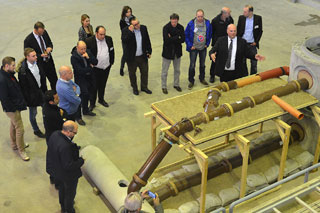 Two up, one down: the test set-up.

These patterns of damage were arranged as follows:

Frequent visual inspections and leak tests were undertaken as the programme progressed. Finally, when the test rigs were exhumed from the test-pit, the cross-section reduction was measured and the adhesive tensile strength and ring stiffness of the installed liners were assessed. 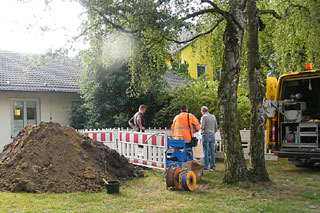 In-situ tests: lab tests were validated through in-situ observation of the same systems being installed at actual construction sites.

In addition to physical tests, the QA/QC procedures were examined. The laboratory results were validated through in-situ observation of the same systems being installed at actual construction sites. The final scores in this IKT Compare test are based on these three evaluations. The range of grades applied is from VERY GOOD (score of 1.0) to INSUFFICIENT (score of 6.0).

Weighting of scores: Water Tightness counts for the most 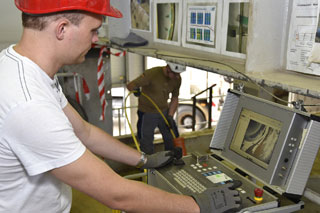 The assessment of QA/QC comprised five criteria: the installation manual, the available training courses, the system’s DIBt (German Government’s approval body) approval, external production monitoring, and a comparison between the installations observed in the laboratory and in the field. The results for each criteria were given a 20% weighting in the final QA/QC score.

In addition to the test criteria used to derive the comparative scores of the systems, supplementary information was collected and presented that would be of interest to the end user. These include results from internal pressure tests undertaken after the rigs were excavated and the adhesive tensile strengths of the liner bonding to the host pipe. The preparatory measures undertaken by the installer, such as initial inspection, substrate preparation and cleaning, were documented. Also presented are: the number of on-site working days, the number of installation staff, the time required for preparatory work and installation, and the costs.

What the systems can do 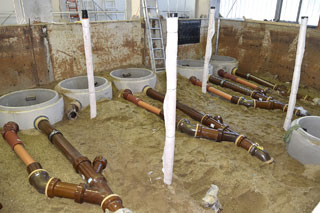 In this IKT Compare project, the system suppliers demonstrated that serious damage to house connections can be reliably sealed using short liners, including breaks, cracks, misalignments and deflections. In particular, the Twinbond and Trelleborg systems proved to be the most reliable under permanent groundwater load, jetting, simulated backflow events and changing groundwater levels. For this they were deservedly awarded the score of 1.0 for water tightness.

In principle, it was also shown to be possible to seal the changes in nominal diameter and pipe material in Test Setup II. However, four of the systems came up against their performance limits here, showing weak points, which led to infiltration. In one case, gushing water was visible immediately after installation. Therefore, changes in diameter and material require special attention during installation.

Results of Test Setup I

All eight short liners showed very good to satisfactory results for the four damage patterns in Test Setup I: cracks, broken joint, radially displaced joint and joint displaced at an angle. No infiltration was observed during the whole test period. However, about half of the systems showed visual abnormalities in the form of moisture and/or discoloration at some locations, but without the formation of droplets. 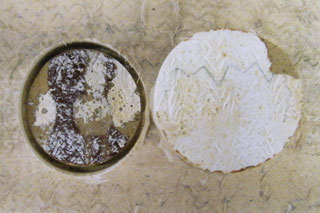 The structural stability testing of the short liners showed that they basically have reliable adhesive and load-bearing performance. For products with full-surface bonding of the liner to the host pipe, hardly any abnormalities were observed, i.e. no crack formation, no excessive deformation, no stability failure nor large-surface loosening of the adhesive bond. Five systems showed partial loosening of the adhesive bond at points of changing diameter or pipe material, albeit without any consequences.

The Cosmic system is not intended to bond over the full-surface, only at the start and end of the liner. However, the supplier was able to submit a static proof which confirmed the structural stability of the short liner observed in the test. 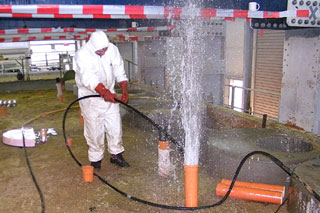 High-pressure jetting did not affect the short liners.

The test scenarios simulating sewer operation, such as high-pressure jetting, water backing-up in the pipe, and changing groundwater levels, had no significant effects on system performances.

In conclusion the IKT Compare project “Short Liners for House Connections” has demonstrated that short liners can renovate even severely damaged sewer pipes. However, changes in diameter and material require special attention during installation as they might cause serious problems. It is important to select the right system for the task, to understand the limitations of individual systems, and apply the necessary QA/QC before, during, and after installation. 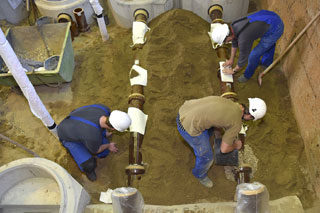 The objective of IKT Compare projects is to provide network operators with reliable, neutral, and independent information on the strengths and weaknesses of products and methods in sewer technology. IKT Compare projects are always undertaken in collaboration with network operators. Their representatives form a steering committee which takes all important decisions on how to test the products.

At the core are tests under realistic service life conditions such as traffic and ground loads, groundwater pressure and high-pressure jetting.
Each IKT Compare project is accompanied by a steering committee set up of network operators. The committee meets regularly and takes decisions on:

The actual testing and documentation of the results are carried out by IKT, as a neutral and independent institute. As a result, network operators are provided with independent, practice-related, and technically well-founded information on the strengths and weaknesses of products, their applications and limits.