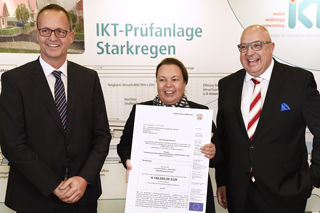 There has been more heavy rain in recent years than ever before. Heavy rains in Wuppertal, Münster, Dortmund and numerous other cities have been bad experiences. They led to catastrophic local flooding with extensive damage to private and public buildings. Even people were harmed. 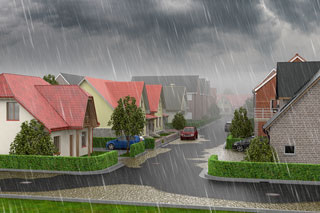 More and more frequent, local heavy rainfall events cause enormous damage. IKT is researching the rainproof design of our cities.

IKT Managing Director Roland W. Waniek: “Our research question is: How can damage caused by heavy rain be mitigated or even prevented in the future? The existing sewer systems are not designed for these water masses, for justified reasons. Therefore, new approaches, new techniques and new urban planning concepts are needed.”

Computer simulation is not enough

Because of the complex urban conditions and mixtures, especially in the inner cities, it is very difficult to develop solutions on the computer alone. The dynamics of rainwater and its flow behaviour in urban areas quickly push even the best simulation models to their limits.

Scale of 1:1: The new testing facility will be able to simulate heavy rainfall and flooding.

For this reason, IKT has designed a new test rig which simulates realistically on a scale of 1:1 how rainwater flows off roads, residential and commercial areas. The new facility will enable IKT researchers to replicate entire road sections, including all the associated installations such as kerbstones, gutters, gullies, manholes and pipes as well as state-of-the-art rainwater retention equipment. Even road gradients of up to 10 percent can be created.

Water from below, from above and from the side 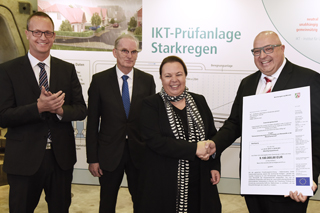 The experimental setups will then be exposed to heavy rain masses of 1,000 litres per second and hectare. This could be used to flood a football pitch ankle-deep in a good quarter of an hour. In addition, large-scale flooding of streets and squares can be simulated with a water surge of 250 litres per second. This could fill two bathtubs in one second.

In a water cycle driven by powerful pumps, flooding can be simulated again and again to observe the behaviour and performance of the road and drainage system and its protective effect on people and property. 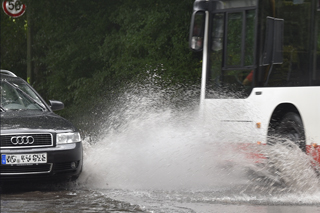 The research results from IKT will allow conclusions to be drawn for the future rainproof design of roads, footpaths, cycle paths and underpasses. It will also show how buildings can be better protected. Above all, the Institute aims to provide local authorities with practical insights that can be used in a targeted manner on site. Also the environmental regulators can see which technical regulations and legal requirements make sense and which may need to be changed.

The new IKT test facility will also have a control station with which measurement data and video images of the tests can be visualised in real time and transmitted via the Internet. This will enable scientists worldwide to observe and comment on the experiments being carried out in Gelsenkirchen. Research on heavy rainfall and urban flooding will be internationalised, as heavy rainfall does not only exist in Germany.